May was a busy month for Adrian. He was invited to represent Ghost Walking in Brighton by Brighton Visitor to be on the first Tour Bus of the season alongside The Lady Boys Of Bangkok and the Lady Mayoress.

He experienced the tour (highly recommended)  and then ended up at the new Amex Stadium (Home to Brighton and Hove Albion - The Seagulls) for a photo shoot.

Lynn Ruth Miller for The Latest.TV. Follow this link to see the show:

Following many enquiries about his unique walking cane, Adrian is now producing replicas for sale. As a prop-maker, Adrian has created a durable and beautiful conversation piece that will enhance your evening wear or indeed, enable you to get about on a daily basis with a cane that will frequently catch the eyes of others and prompt them to ask where you got it. Every cane is hand-made to order and costs a very affordable £35.

There are also a series of DVDs planned, each containing footage from all-night vigils Adrian and his team will be carrying out to research locations covered briefly on the actual tours. Will any full-body apparitions show-up on camera?

You will be able to join the crew and a local celebrity guest and see the pains and hear the screams as  they carry out several tests and experiments (including seances), all from the comfort of your own arm chair!

Will they be able to prove  the hauntings once and for all ? You'll just have to wait and see. As soon as the first disc is ready there will be a special "MERCHANDISE PAGE" appear on this website. Keep coming back to check us out.

(copy of the latest Press Release)

Firstly, and most importantly is that as of Thursday 6th September (the first Thursday after PRIDE) the three-nights-a-week tours will begin from THE MARLBOROUGH, 4 Princes Street, Brighton, BN2 1RD.

The walks start at 7.30pm every Thursday, Friday and Saturday and last approximately an hour and three-quarters with a fifteen minute stop at the half-way point for specially designed cocktails exclusively for Ghost Hunters.

There's no need to pre-book; you just turn up and pay on the night. Tickets cost £8 for adults, £4 for children and £5 for Students, Seniors and those without employment.

Adrian now has a new assistant who will be manning the ticket sales side of things and who will be pleased to answer any of your questions before booking your place on the tour.

Kreepy Kemptown is branching-out too. Not only has Adrian begun writing a book about the ghosts and hauntings of the Kemp Town area but due to the numerous enquiries he gets about the unique walking cane he uses when in full Victorian costume, he has started producing them commercially.

For the bargain price of £35, you too could be the proud owner of a unique, hand-made crystal-skull topped walking cane that is sure to spruce up your evening wear and be an instant conversation-piece.

There are other plans afoot too;  a financial investor who has been observing Adrian's work for the last few months has come forward and there is every probability that what started out as a guided tour of the haunted locations around this second most haunted city in the country (second only to York) is about to expand into other areas of business.

"It's a very exciting period for both myself and others working with me." says Adrian. "But one thing's for sure, the Ghost Walks are here to stay.

"There will be a short break in January, but the tours will continue throughout the year, come rain or shine. It's the one night out you can always guarantee."

(The Marlborough Hotel . . .one of our

Article that appeared in THE ARGUS on Monday 6th August 2012

Below is the first article about the Ghost Walks of September 2012.

It appeared in the September issue of "G-Scene"

Halloween is nearly upon us and below you will find the current PRESS RELEASE and publicity photograph, giving details of the extra tours for that week. Kreepy Kemptown Ghost Walks' final tour of 2012 will be on 22nd December. We will be taking a short break and returning for another scary year on 1st February 2013. We do hope you will be able to join us for Halloween.

Halloween sees ghosts and other scary entities out en-force, so what better time for taking a tour of the many haunted locations in Brighton’s East End?

Since February this year, Kreepy Kemptown Ghost Walks (hosted by Actor and Storyteller Adrian J Andrews) has been doing just that, but it all seems to have been building-up to the big event on Wednesday 31st October; All Hallow’s Eve, otherwise known as Halloween!

On Halloween, the walks begin at 4.30pm, (a special for the kids who would otherwise be terrorising their neighbours by donning weird and wonderful costumes and knocking on front doors), 7.30pm and 10pm.

Each tour lasts around 105 minutes and takes in 17 haunted locations and on Halloween the kids will all be given a free gift as a souvenir of their spooky evening.

On Thursday 1st November it’s business as usual and the tours will continue on the same nights every week up until the last one of the year on 22nd December.

After a short break the tours are back for another year, starting with the first of 2013 on February 1st.

The Kreepy Kemptown Ghost Walks cost £8 for Adults, £4 for Children, £5 for Seniors and Students, and the tickets are available at the box office and start-point at

Happy New Year to all our Ghost Hunters.

2013 sees yet more changes to Kreepy Kemptown Ghost Walks. We are changing venues yet again, and as of 2nd February we will be operating from THE QUEENS ARMS, 7 - 8 George Street, Kemp Town, Brighton, BN2 1RH (1st left off St. James Street when approaching from The Old Steine).

We are also operating on Saturdays only; at the same time as always, 7.30pm.

This year we are introducing some new souvenir merchandise in the shape of a small colouring book entitled "The Kreepy Kemptown Ghost Book" which is beautifully illustrated and full of facts about the Astral population of Kemp Town. The book will be available at the Box Office in The Queens Arms and is suitable for adults and children alike.

We have also introduced on-line bookings for Adult tickets. You can now book your Ghost Tour in advance by going to

The new season of Ghost Walks has now begun and the following article appeared in G-Scene magazine's  February edition to herald the second year of "Kreepy Kemptown." 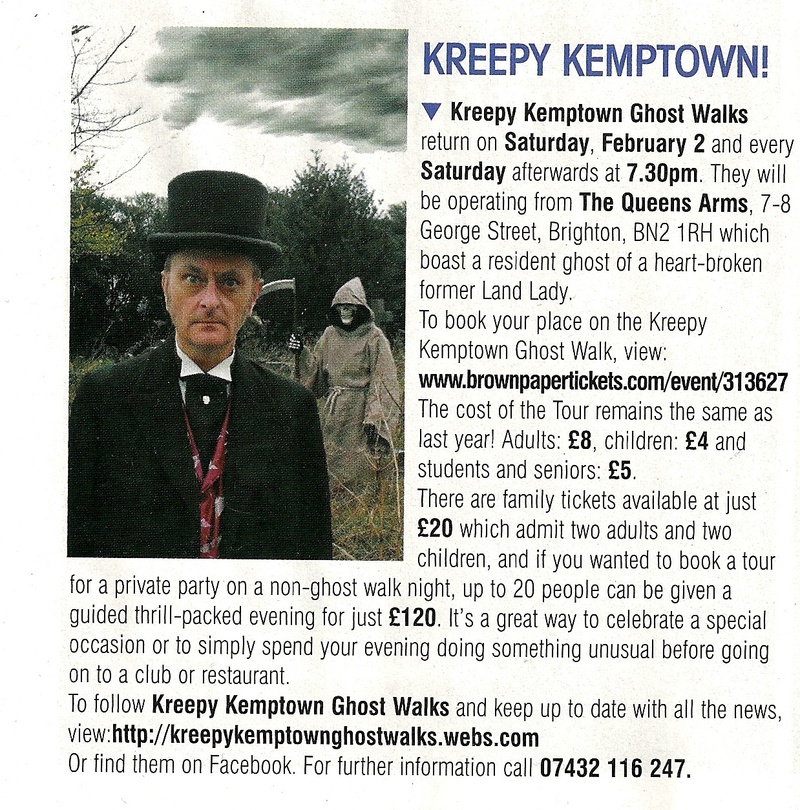 On Friday 8th February, Adrian has been invited back into the studio of "Brighton and Hove Community Radio" to once again appear on their show "Scene and Heard" hosted by Wil (DJ-BC) Jewitt to talk about the many spooky goings-on in Kemp Town. If you are reading this before the show, if you go to our Facebook page you will find a link to to radio station's Home page which will give you instructions on how you can listen via your computer or phone.

Halloween is almost upon us yet again. Assisting Adrian in the production of this year's poster photograph was the very talented model, Cherry Plum who, despite her natural good looks, looks like "death warmed-up" as her Victorian Ghost Lady pummels on the window of The Queen's Arms in George Street! 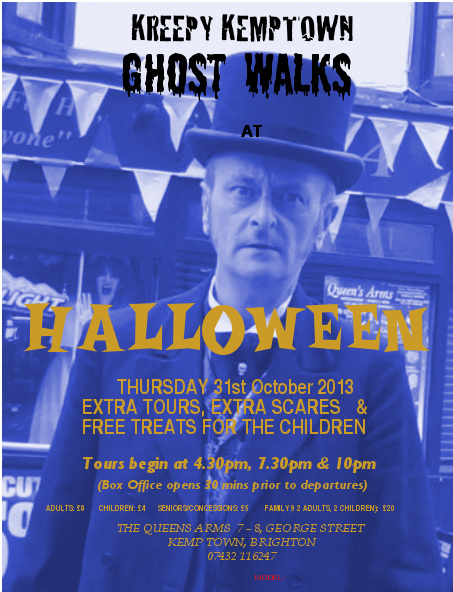 Also in October, Adrian has been approached by a student at the University of Brighton to partake in a documentary about the hauntings of Brighton's Kemp Town. A pre-production meeting happens very soon.

Adrian is also the Producer of a tribute night to MOST HAUNTED LIVE to be held towards the end of this year at Bar Jolly Brewers, Clifton Road, Worthing. The event will be filmed before a paying audience  and will be released on DVD in the New Year. All proceeds (after expenses) will go to a charity of the Landlord's choice.

The Presenter for the evening will be actor Alexander Hunt and the investigative team will be lead by Adrian himself. Filming of the titles for the show has already begun.

If YOU would like to be a part of this exciting event, register your interest at www.facebook.com/kreepykemptownghost walks. 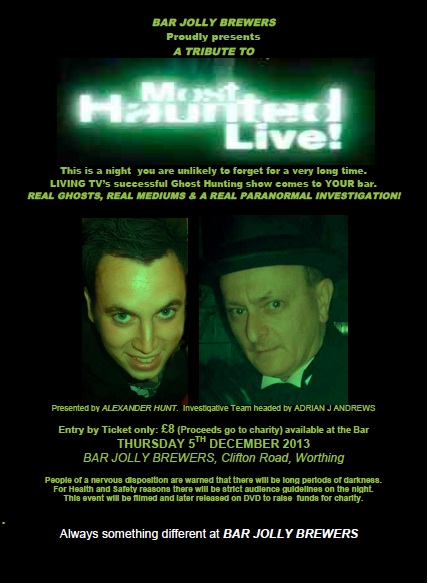 Coming up on the 5th December (Thursday) is a very special event indeed.

Adrian heads the investigative team on a Tribute Night to MOST HAUNTED LIVE.

The event will be taking place at Bar Jolly Brewers, 39 - 41 Clifton Road, Worthing, West Sussex, BN11 4DG and will be hosted by Alexander Hunt who is already making his name in connection with the Paranormal in his series on YouTube, "Most Abandoned."

The show will be exactly as you expect from the Antix Productions' original complete with the original music and a camera crew. Proceeds form the ticket price of £8 will go to charity and the event will appear on DVD at a later date which will also raise funds.

Tickets are already in high demand and there are only 85 up for grabs. So don't lose out; purchase YOUR'S now, either by visiting Bar Jolly Brewers or by phonining them on

UPDATE ON "MOST HAUNTED LIVE"

The evening was a resounding success and managed to capture the atmospher of the Antix Productions original. So successful was it that the entire team were offered a television series straight afterwards.

The new show will be recorded in 2014 and broadcast later in the same year on the new Local Channels, nationally.

As soon as the show's title is announced, updates will be published here and on our Facebook page.

The first announcement of the year has to be our new publicity picture that appears on all leaflets and posters for the 2014 season. As with last year, we are following the Film Poster theme and this year's is very obviously the iconic poster for "The Exorcist" with Adrian replacing the figure of Max Von Sydow. 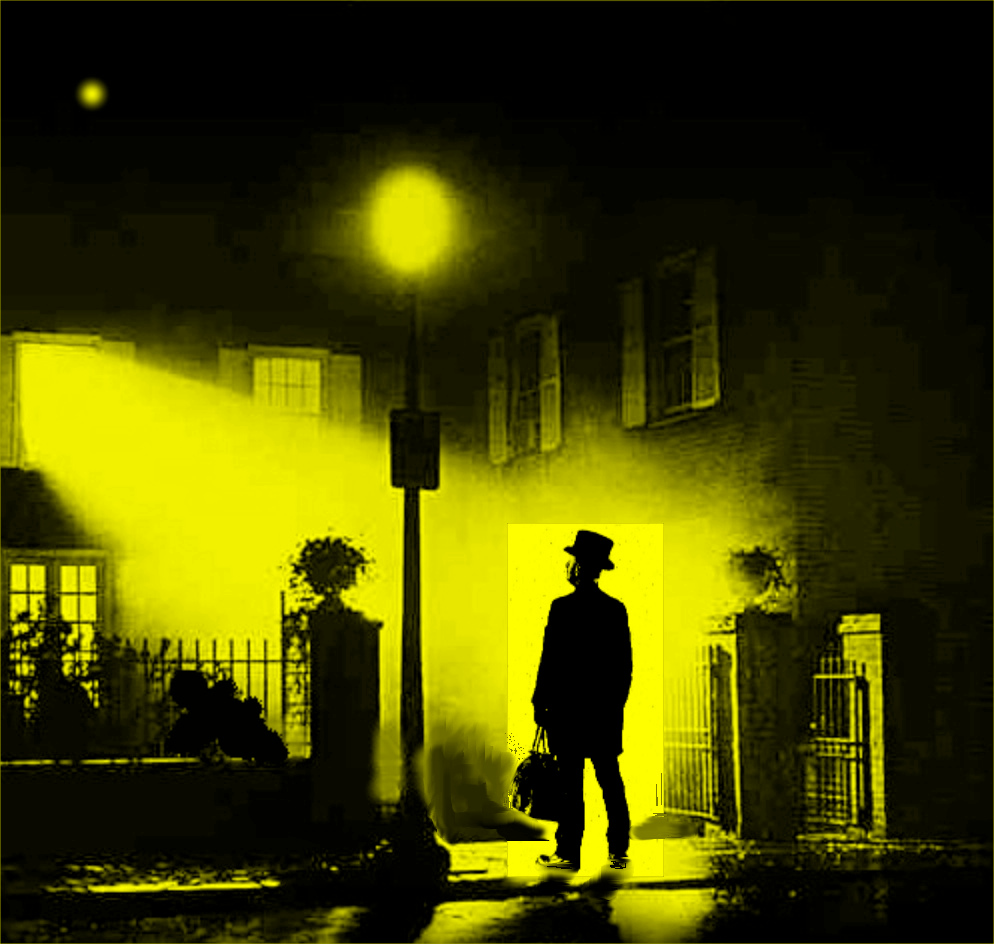 2015 is set to be a brilliant year for this, currently the longest Ghost Tour in Britain's second most haunted city.

A Television Production Company have expressed interest in entering a partnership with Adrian and turning the Kreepy Kemptown Ghost Walks into the most original in the country, expanding the content and experience for all comers, threefold. (More news on this later).

This year we continue the famous horror movie theme in our publicity. Here is what to look out for in the coming weeks: 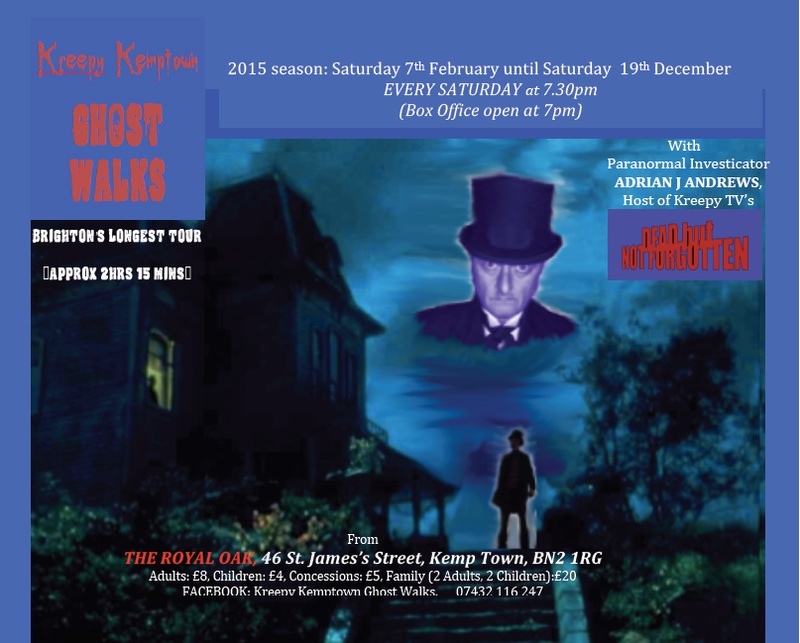 On Saturday 10th October The Kreepy Kemptown Ghost Walks will be starting from The Marine Tavern, 13 Broad Street, Brighton, BN2 1TJ. The tour itself will have brand new content but is still expected to take  approximately 2 and a quarter hours. (Still Brighton's longest tour).

There will (as usual) be TWO tours on Halloween (31st October), the first starting at 16.30 and the second at 19.30. The earlier one is especially tailored for younger folks who bring along their adults!